Honaker Trail is a hike near the Goosenecks State Park that descends from the canyon edge to a sandy beach on the San Juan river. 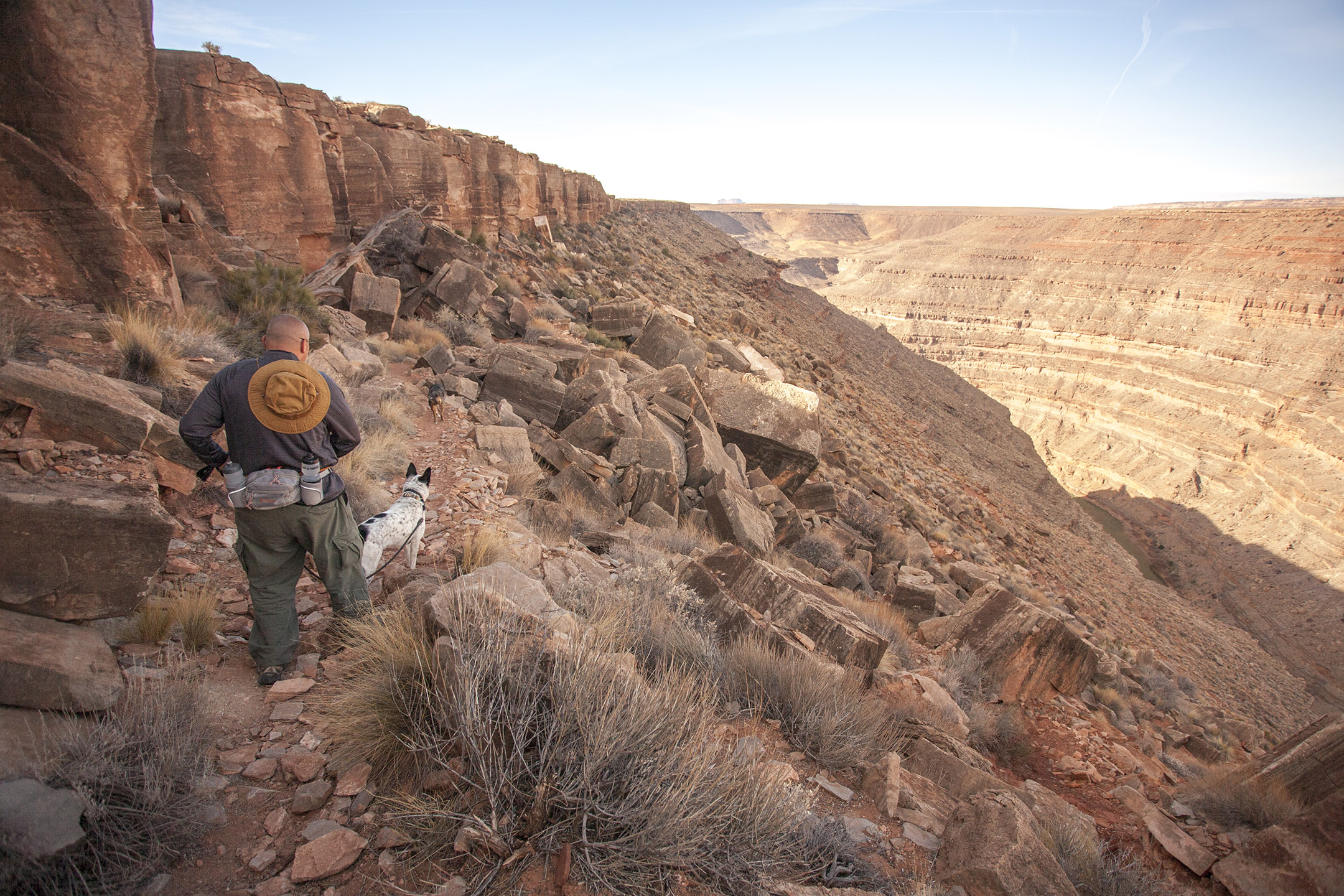 The beginning of the trail, just below the rim.

The hike there and back is 5.78 miles total, and descends, and on the way back ascends, 1377 feet. We hiked it in just under 3h 30min. It has lots of switchbacks, but also long stretches on the rock wall parallel to the river, where it seems like the trail is just looking for the right spot for the next set of switchbacks. You won't know whether to curse the long stretches between switchbacks making you walk much more, or thank them for giving you a chance to rest.

There are no bathrooms or such. Bring a lot of water.

The cliff wall provides nice shade in the mornings. Closer to noon on your way up, you'll be exposed to much more sun, but there are still some shady spots to rest in. 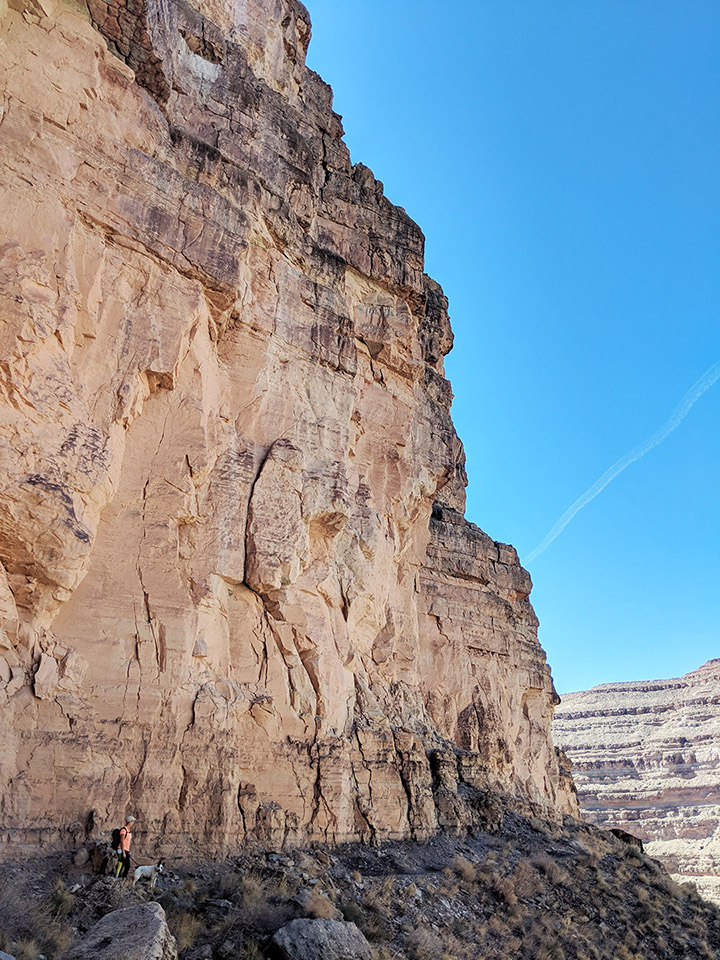 A welcome shady and flat section of the trail.

How to get there

The final stretch of drive to the hike is a high clearance track across cow pastures. 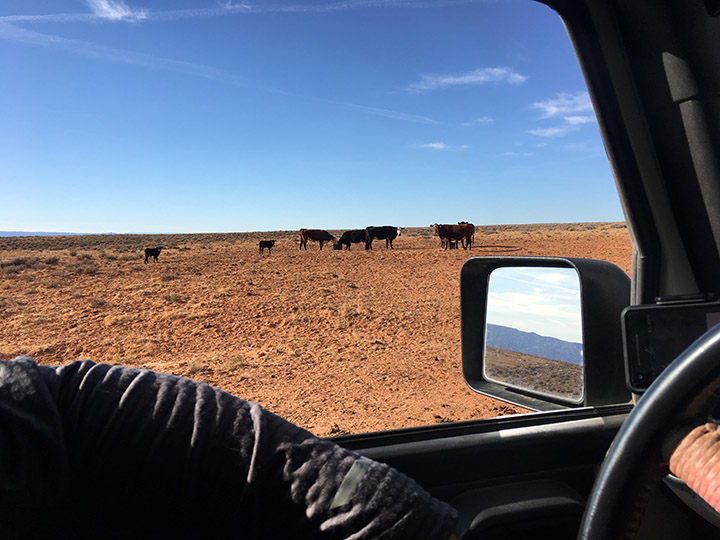 The cows seem surprised we had made it this far!

It's in a fine condition, but between the tire tracks is a tall mound of dirt that will ruin the day for regular passenger cars, and I'd worry about driving it with any car that didn't have some sort of armor plating on the bottom. You might be able to park at the start of the high clearance track, essentially in a ditch, but that would likely make the total hike exhaustingly long. Biking from Goosenecks should work well if you have a bike that can cope with soft dirt. 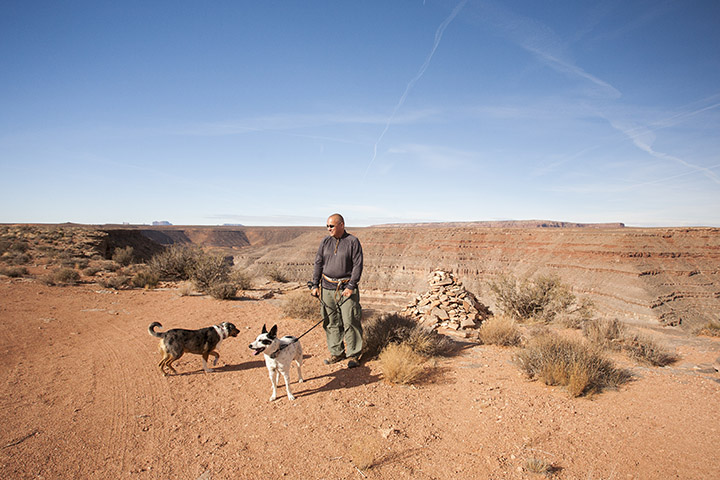 Look for the large cairn that marks the beginning of the trail.

On the following map, the line starts at the beginning of the high clearance track, and the P sign shows where we parked.

Along the edge of the canyon were some fire rings for car campers. Not sure who owns the land, do your research on whether it's BLM or what.

A paper posted on a bulletin board at the Goosenecks State Park says that the hike is rated class 1-2 terrain (hiking to simple scrambling, sometimes on all fours). I'd rate this hike moderate to strenuous. That paper also claims 3.8 miles round-trip and elevation change 1,300 feet; I'm reporting what I measured with GPS, though we parked a short distance away from the starting cairn. The paper also uses a coordinate format I don't remember ever seeing, so who knows how old it is.

What the dogs thought of it

The dogs had so much fun, Mushy especially loved the river at the bottom (he had no idea there was water there!). 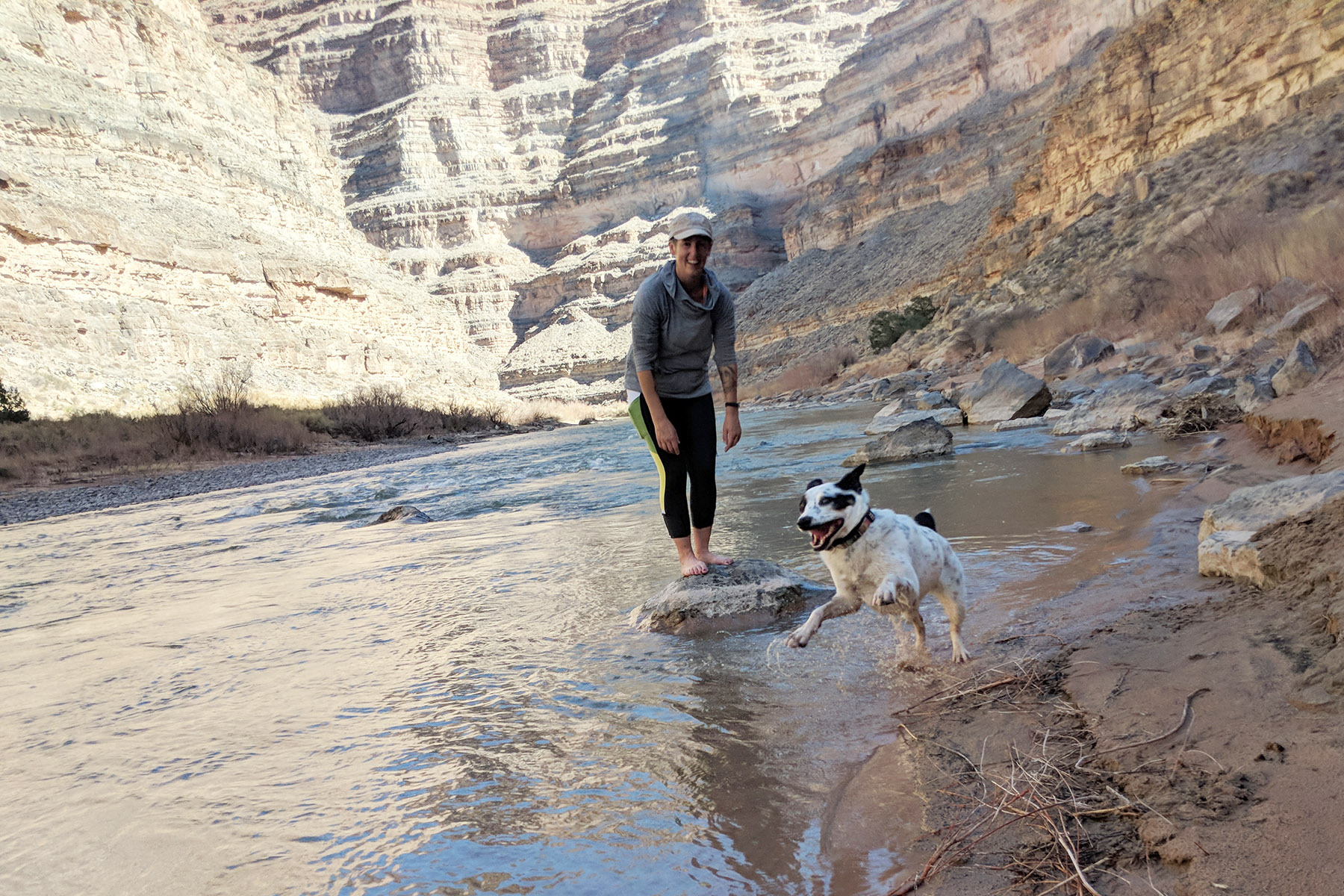 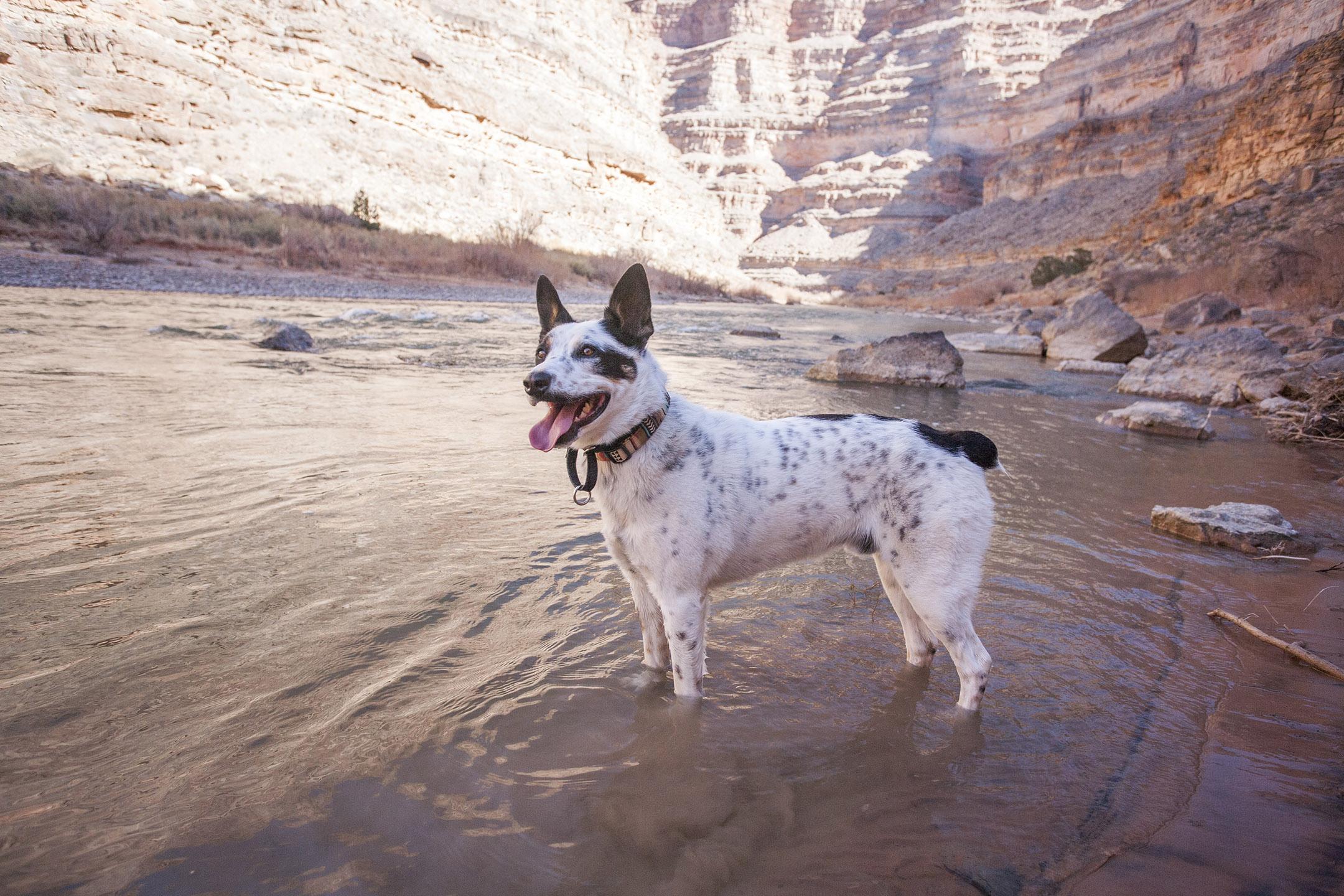 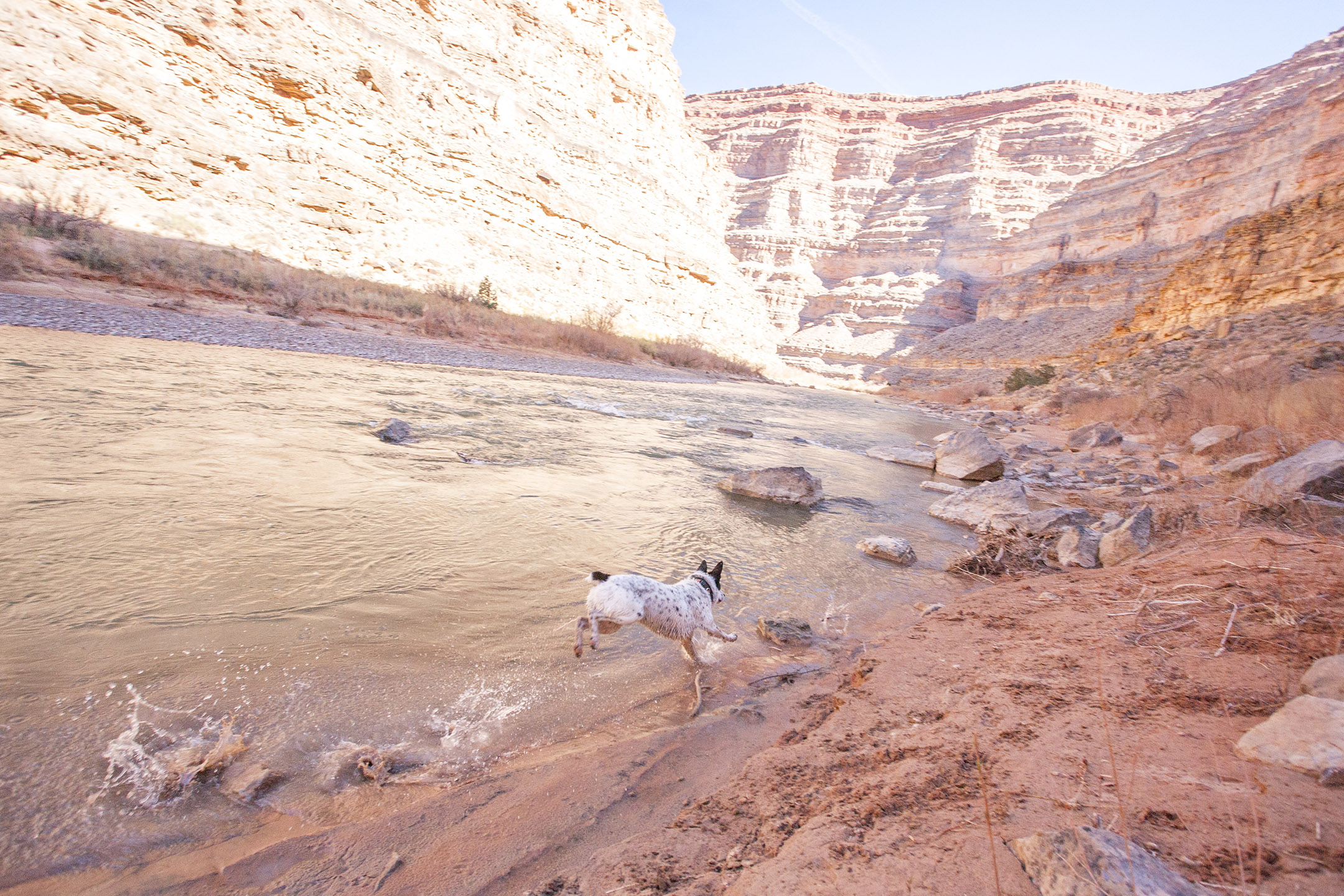 There were a few hip-height ledges with rocky bottoms they didn't dare to jump down from, so I did some dogfit lifting. On the way up, the dogs were much more willing to jump and climb on their own. 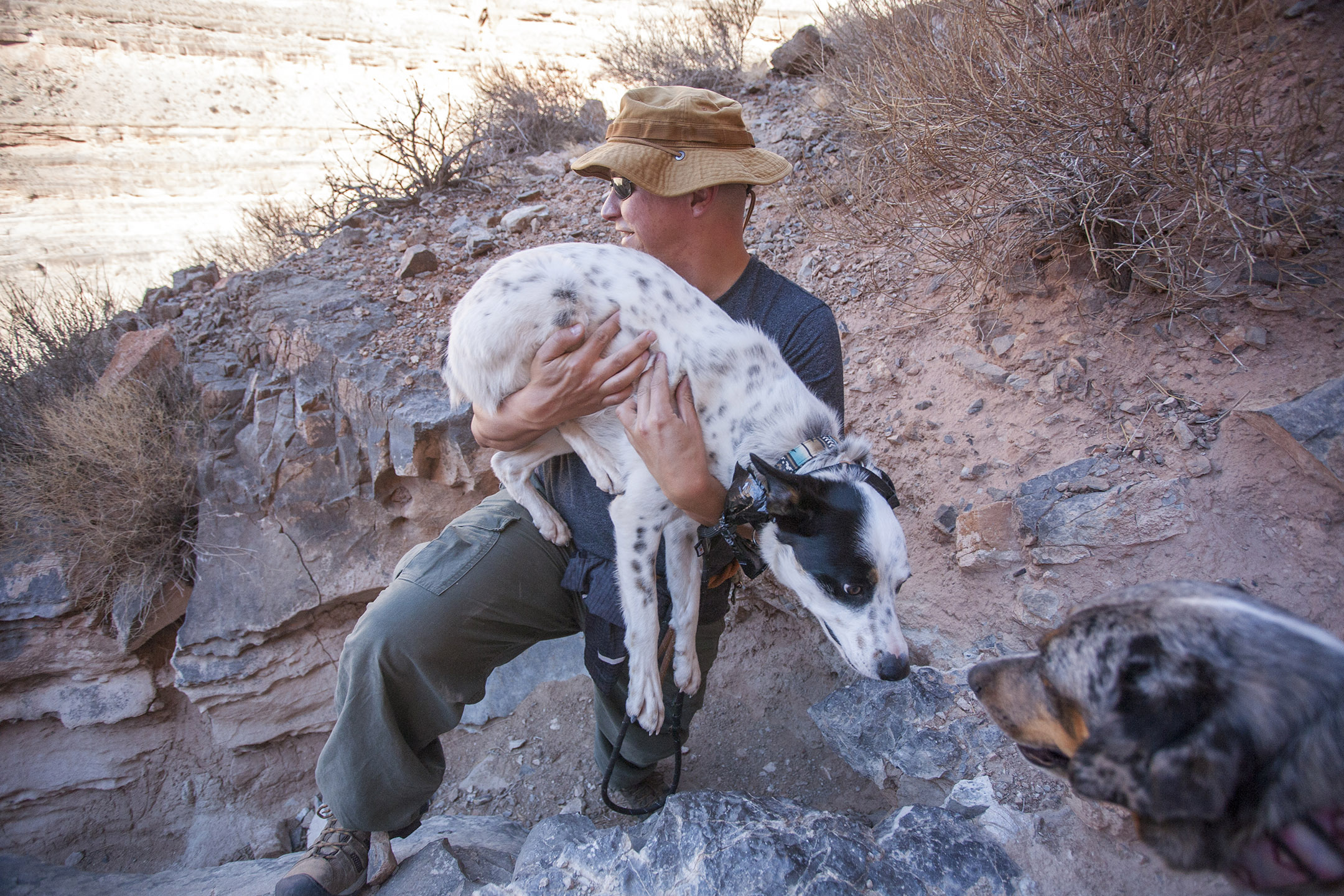 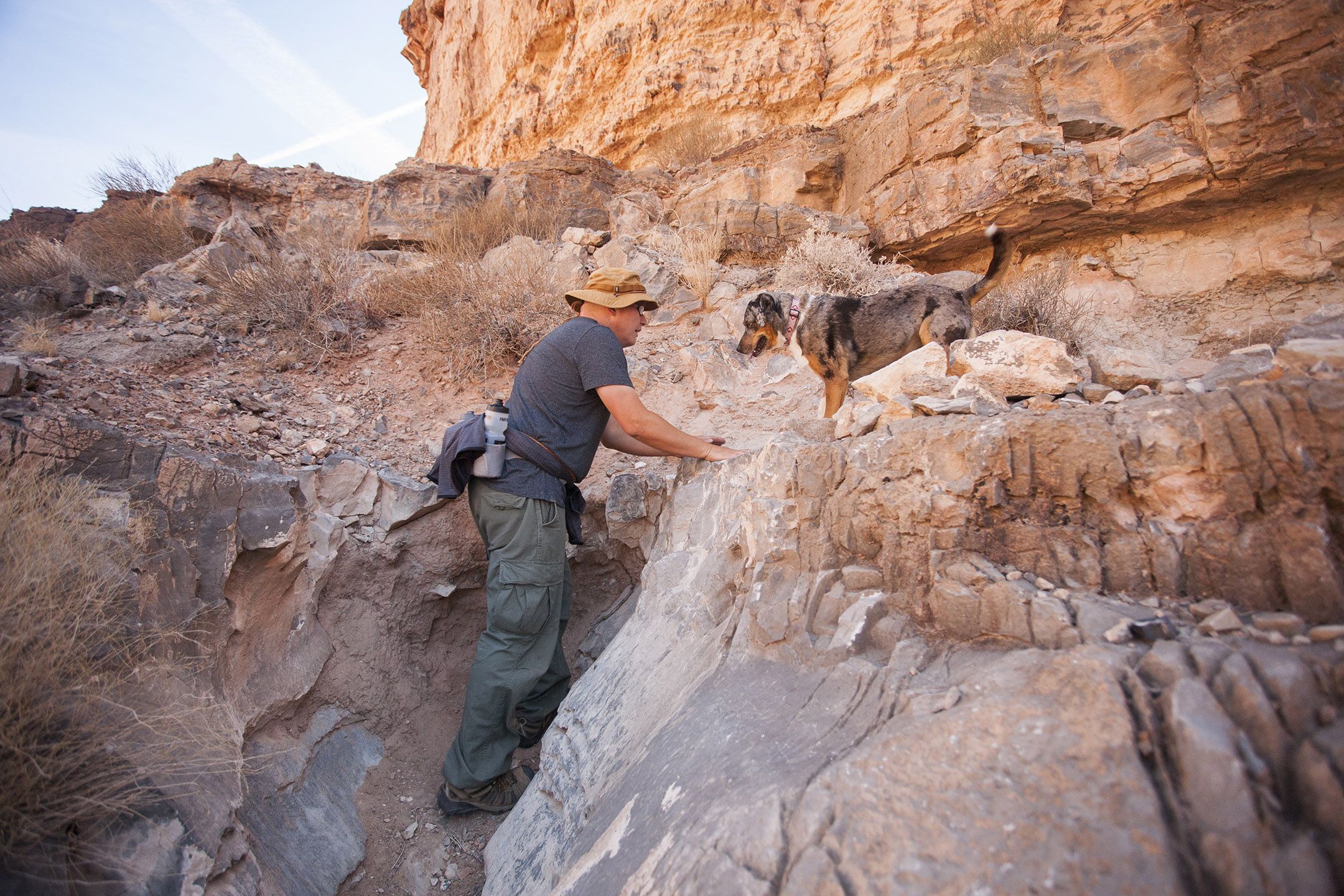 Lily waiting for her scoop. 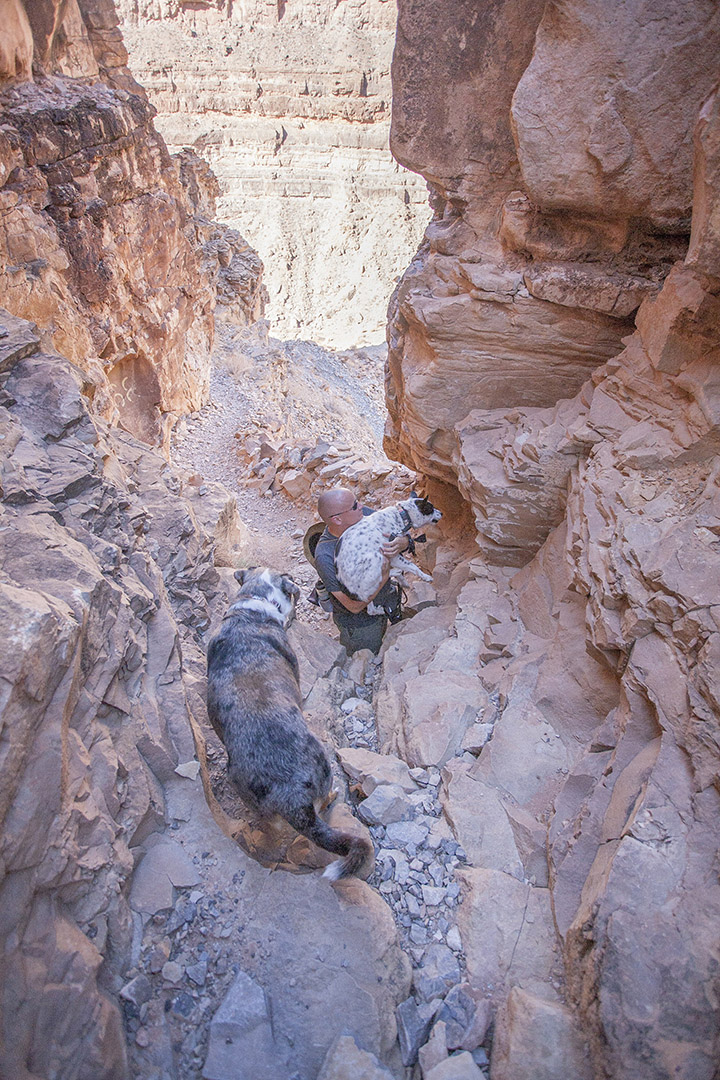 The trail was built in 1893 as a supply route for gold miners in the area. It took about a year to complete, and required quite a lot of building up to smooth out the multiple vertical drops. The first horse that tried to traverse it fell to its death! The local gold boom did not last long enough to see the trail being used for that purpose.

Ane keeps saying she wants to hike the Grand Canyon, and while this place might be slightly less grand, it's still a gorgeous canyon and a hefty climb. We still need to hike lots of the smaller canyons first... 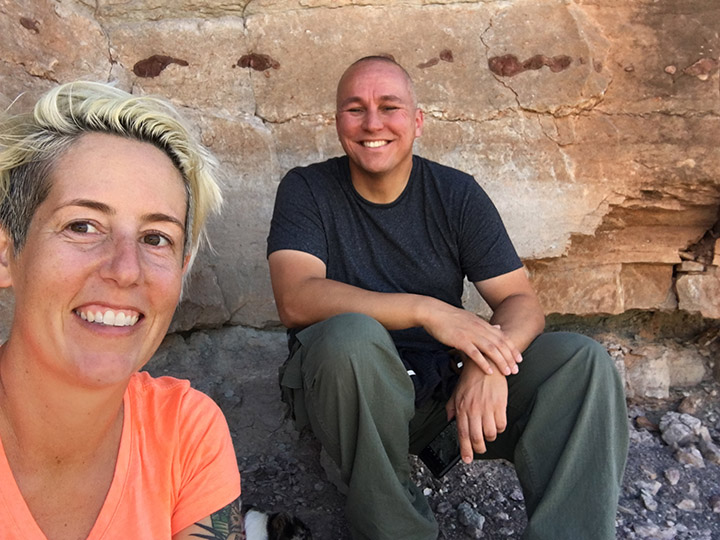 Our last break before we reached the top. At this point we were both pretty wrecked!